Orphan Trains and "A Partner's Promise"

The streets of eastern US cities were populated with thousands of homeless children in the Nineteenth Century. Imagine the misery of those little souls--starving, cold, living without love or dignity, being taken advantage of by heartless adults. Their suffering had to be more than any of us living in our comfortable homes in the Twentieth-First Century could imagine.

Fortunately for tens of thousands of displaced children, a man named Charles Loring Brace saw their suffering and did something about it. He organized one of the greatest social experiments ever undertaken. Brace created a society which offered a second chance to homeless children in the East via what came to be known as "orphan trains."

"A Partner's Promise" is a fictional account of the life of Axel O'Grady and how it was changed when he was convinced by a judge to leave New York on the orphan train.

"A Partner's Promise" was nominated for an EPPIE Award in children's literature, and it won a Recommended Read Award from "Fallen Angel Reviews." It is available in E-Book at Amazon, BN, I-Books, Kobo Books and Sony. Find the book in paperback at Amazon. 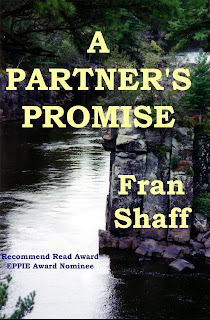 1880s, New York City. Caught Stealing...When homeless, orphaned Axel O'Grady steels a loaf of bread a judge gives him a choice--go to jail or take the Orphan Train from New York to Iowa to be placed out with a new family. Axel chooses Iowa, but he promises his best friend Nate Greenleaf he will return. And A PARTNER'S PROMISE can never be broken.

Setup: When Axel and his friend Nate are beat up by a bully, Nate is hospitalized, and Axel nurses his wounds in his furniture crate home, unable to work for his food. By the third day of his ordeal he is starving, and he reluctantly resorts to stealing a loaf of bread. He gets caught and, since he's old enough to be treated like an adult at age eleven, he's thrown into jail.

A large, cold, stone room smelling like liquor and human filth was Axel’s new home. The familiar, hideous odors he’d come to know from his life on the streets were even more sickening in jail.

Light filtered through a small window high on the back wall of his cell.

A dozen upper and lower beds lined the perimeter of the cell. He’d chosen an empty lower bunk when the jailer had brought him in. He curled up on the foul blanket and watched a half dozen pairs of eyes study and assess him.

“If you snore, boy, I’ll choke you till you quit,” a gruff voice uttered from above.

Axel turned his face to the wall. He’d never been any place as wretched as this jail cell. Yet even being thrown into this horrible, cold room was a worthwhile price to pay for having something to eat.

Laying on his back and staring between the slats at the stained mattress on the bunk above him, Axel decided he needed to think of something besides where he was and why he was there.

Axel appeared before a judge later in the afternoon the day he was arrested.

Judge Thomas, a stern-looking man with glasses and a mostly-bald head, studied a paper as Axel stood silently before him.

“This report says you stole a loaf of bread,” Judge Thomas said, peering over the top of his glasses at Axel. “Is that right, boy? Did you steal a loaf of bread?”

“Yes, sir,” Axel said, looking down and placing his hand over his stomach.

Axel looked at the judge. “Yes, sir. I was very hungry.”

“Hungry, were you? That’s no excuse for breaking the law. If you want to eat, you should work for your bread. You young people must learn.” Judge Thomas stared hard at him. “What do you have to say for yourself, Mr. O’Grady?”

“I’m sorry, sir. I do work. I’m a newsie, but another boy beat up my friend and me and took our money. I have been too hurt to work. I ran out of food, and I was so hungry, sir.” Axel prayed Judge Thomas would accept his explanation and give him a chance to pay for the bread when he could work again.

“I’m not your mama, boy. Your problems are your problems, not mine,” Judge Thomas said firmly. “If you steal you go to jail. It’s as simple as that. Besides,” he added, running his gaze over Axel carefully, “if you got yourself beat up, it’s your own fault. You Irish are always causing trouble.”

Axel wanted to cause the narrow-minded judge some trouble right now, but he couldn’t. Instead, he swallowed back his anger and meekly replied, “Please, your honor, sir, please don’t send me to jail. I’ll pay for the bread.”

“I thought you didn’t have any money.”

“I don’t, but I’ll work again soon. I’ll pay for the bread when I can work again.”

“Not good enough,” the judge said, shaking his head. He looked at the papers before him. He rubbed his chin and thought a moment before he went on. “You got any folks?”

Axel shook his head. “My parents are dead.”

Judge Thomas nodded slowly. “I suspected as much,” he said, staring down at Axel over his glasses. He stroked his hand along his jaw and narrowed his focus on Axel. “Have you heard about the trains which take orphans west to be placed out in new homes?”

Axel not only sold newspapers, he read them too. He’d seen stories about city children finding new homes in the country. “Yes, sir, I know of them.”

The judge took off his glasses. “If you’ll agree to go to the Children’s Home and wait there to be sent west on the next train, I won’t send you to jail.”

Axel felt as though an anvil had fallen on him. Jail or leave New York City. How could he stand either one? No matter which he chose he’d have to leave Nate.

He decided there was only one choice he could make, and it wasn’t jail. “I’ll go to the Children’s Home, sir, and take the train west.” He spoke in a firm, decisive voice. He wanted to be sure the judge wouldn’t change his mind and put him back in jail.

“Fine,” the judge said, putting his glasses back on. He wrote something on his papers, and, when he finished writing, he looked up at Axel. “Don’t you try to run off,” he said, pointing his finger. “If I see you in this court again you’ll go to jail for sure.”

The judge promptly turned Axel over to a police officer and told him to take the boy to the Children’s Home right away.
-------

I hope your week goes better than Axel's did...