I've done a lot of editing of books this year, rewriting too.

Today I'm thinking how different everything would be if we could edit or rewrite our lives the way we authors update and upgrade our works.

While I believe much of our lives would remain the same because we would choose to not change things, we'd likely decide to erase some of the things we've done and either do nothing or something totally different. In some cases, when we chose to sit on the sidelines, we may choose instead to take an active part in correcting a wrong we had witnessed.

If you could "rewrite" or "edit" a part of your life, what would it be?

As for me, I would have made writing a priority much earlier in my life because, once I did, my life got better. I felt more accomplished and fulfilled. And who among us doesn't want to feel fulfilled?

I'd also have liked to have been a lot stronger when I was younger. I let too many people push me around, and it stifled me and held me back from accomplishing things I wanted to do until later in life.

Anything we do directly affects people around us, and it affects us too. Our life experiences make us who we are based upon our reactions to what happens to us. Other people become who they are sometimes as a direct result of something we may have done to or for them.

While we cannot rewrite the past we can shape our future. We can choose to make the same mistakes again even if we regret having made them or we can decide to live a certain way and follow that plan, doing our edits and rewrites as we go along by taking time to think before we act.

Doable, yes, but not always easy.

This is getting a little heavy. I think it's time to stop thinking so much about rewriting life, which is often too hard, and go back to doing my edits and rewrites on my current fictional project. We'll probably all be happier if I do. :-)

Here's hoping your week is a wonderful one, full of God's blessings.

Fran Shaff, Award-Winning Author
http://sites.google.com/site/fshaff
Posted by Fran Shaff at 10:02 AM No comments: 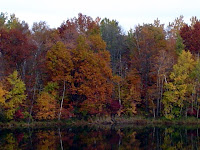 Autumn is the perfect time of year for family outings too. We've taken a couple of drives this fall so far, and we truly enjoyed the sights.

Unlike the terribly wet, cold October last year, this fall has been warm and dry. Farmers have been out in full force bringing in the harvest--corn, soybeans, sugar beets, apples, pumpkins and so much more.

I can't watch these strong individuals working in their fields without thinking about the importance of their work--providing for the needs of all of us in the US and, indeed, in the world.

Feelings of thanksgiving come over me whenever I travel through the country. We are blessed with plenty here in the US, with the ability to raise enough food for ourselves and for so many others throughout the world.

If you haven't yet taken the time to enjoy the outdoors this autumn, I hope you set aside a day or a few hours to see the beauty surrounding you.

God bless you with a wonderful, beautiful autumn week.

Fran Shaff, Award-Winning Author
http://sites.google.com/site/fshaff
Posted by Fran Shaff at 7:54 AM No comments:

Before You Write Your Novel--5 Tips to Help

Preparing to write a novel can sometimes take almost as much time as writing the first draft.

So, how does the novelist tackle her pre-writing chores?

1. She researches the time period in which the novel is set.

2. He knows the location where the novel is set.

4. She plans her plot from start to finish, then she follows her plan. A professional writer will not become sidetracked from her novel's plan, but she will add enhancements to her plot as she writes and rewrites her story.

5. The plot plan method a writer uses is strictly up to him. An outline works better than a storyboard for some writers. Others like to use chapter summaries. Some writers summarize or outline scenes and group them into chapters. Whatever method works best for the individual writer is what he should use since his comfort level with his method will enable him to be more productive.

Pre-writing can save time and cut down on frustration levels as a writer works on her book. I highly recommend the ultimate in organization of plot and characters before a novelist begins to write her story.

Fran Shaff, Award-Winning Author
http://sites.google.com/site/fshaff
Posted by Fran Shaff at 7:15 AM No comments:

10 Steps to Completing a Novel

If you've always wanted to write a book, but you've never quite gotten around to doing it, help is here!

Take a look at these ten steps designed to help you start and finish the book you've always wanted to write.

1. Commit to your goal. This time you are really, really going to write the book you've always wanted to write.

2. Don't let anyone or anything take you away from your focus on completing your novel.

3. Read all you can on the topic of writing. The more you know, the better the project will go.

4. Write everyday. No excuses. Even if you spend only 15 or 20 minutes on your work in progress (WIP) you must write everyday.

5. Designate a workplace and work there. This helps to keep your focus on writing, and it's a gentle mental reminder that you are to work in this location.

6. Schedule writing time and stick to it. Discipline is very important when writing. You are working alone; no one is watching over you, making sure you're working so anything you can do to help with self discipline is good.

7. No matter if you are discouraged, "blocked," or lazy, you MUST write.

8. If you really, really can't get anywhere on your current WIP, don't quit writing; work on another writing project. Personally, I usually have several projects going at once. I seem to be more productive when I work on more than one project at a time.

9. Make a daily goals chart if you need encouragement and reward yourself each time you complete a goal.

10. Never, never, never give up. Persevere until the first draft is complete.

Writing, like any other pursuit, requires dedication and commitment. If you can stick it out throughout the process of completing a book, you'll discover rewards you never expected.

Fran Shaff
Webpage: http://sites.google.com/site/fshaff
Posted by Fran Shaff at 9:47 AM No comments: