After a flood annihilates a wagon train, eleven female survivors try to build a life in Hope, Nebraska.

My brand new ten-book historical romance "Tender Mysteries Series," based on the above premise, begins in 1895, seven years after the disaster experienced by its starring characters.

The first book "Resurrected" is now available as a FREE download at Barnes and Noble, Kobo Books, and Apple's I-Books for I-Pad. Currently, it is available at Amazon for 99 cents, but, hopefully, it will soon be free there too.

"Resurrected:" July, 1895: An investigation into a series of thefts leads Deborah Willet to an irresistible man and a shocking discovery about another love in her life.

The second book of the "Tender Mysteries Series," "Restitution" is also available at Barnes and Noble and at Amazon. It will be available in the next couple of weeks at other Internet bookstores.

"Restitution:" November, 1895: While Amy McKittrick tries to save the good name of one falsely-accused, special man, she falls in love with another.

Book Three of the series, "Retribution," will be available in late November.

"Retribution:" April, 1896: Susan Willet chooses a dangerous path when she joins forces with a handsome sheriff to find the men who kidnapped her sister Bonnie.

The "Tender Mysteries Series" will also be available in paperback. The first book, a two-pack combination of "Resurrected" and "Retribution" will be available in late November. Each paperback will contain two novels from the series.

I'd like to thank all of my readers for their support. You've been wonderful. I truly hope you enjoy this new series. I've written it just for you...

Posted by Fran Shaff at 7:06 AM No comments:

Our creativity manifests itself in many ways.

A songwriter could be an excellent glass blower.

We've seen many actors who not only deliver breathtaking performances but also dance and sing.

As for myself, in addition to writing, I enjoy quilting and knitting. I couldn't possibly count the number of afghans I've made, mostly while watching NFL football. (Can't just sit there and do nothing but watch the game.)

My most recently completed quilting project is a red, white and blue star quilt. 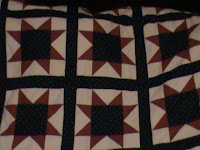 I think all of us have a creative side, just as we all have a talent for logic and reason. Fortunately, not all of us have the exact same creative talents, nor do we use our similar creative tendencies in the same ways.

The more creative we are, the more likely we are to look at things in different ways. Scientists make discoveries because they're thinking outside the realm of known facts. Technically creative people find ways to make computer monitors smaller, cell phones with more function, cameras tiny enough to explore the insides of our bodies.

Whenever we face problems which need to be solved, if we rely on our creativity we're likely to find a better solution than if we stick to old ways of doing things.

Just a thought from one creative person to another...

Posted by Fran Shaff at 4:43 PM No comments:

Without drama there is no comedy, no comedy worth indulging in, that is.

The word "drama" brings to mind thoughts of serious even gut-wrenching stories, but "drama" is just another word for "conflict," which can also have its share of grim connotations. However, if it's to be funny, comedy must be filled with conflict and drama.

Consider the following plot in the classic "Leave it to Beaver" television show. This storyline, filled with intense drama, is one of the funniest episodes of the entire series.

Setup: Ward (the father) gives seven-year-old Beaver money to get a haircut so he'll look good when he plays an angel in the Christmas pageant. He also cautions the boy to avoid losing the money.

Dramatic Point 2: In order to sidestep his father's wrath, Beaver decides to give himself a haircut so Dad won't know he lost the money.

Dramatic Point 3: Beaver has done a poor job giving himself a haircut so his brother Wally gets out the scissors and tries to clean things up.

Dramatic Point 4: Wally has been no more successful in giving his brother a decent haircut than Beaver was so they try to cover up the problem with a stocking hat.

Drama builds as one bad decision leads to another throughout this episode.

Viewers enjoy a hilarious half hour, but the poor characters are really suffering. The boys don’t want their parents to be upset with them, and the parents, upon learning what has happened, face great embarrassment from their “angel” and his horrible haircut in the Christmas pageant.

Conflict moves this comedy from one funny scene to the next.

As a writer, I enjoy composing stories with tons of conflict and drama. Whether the story is as serious as "Stolen Son" or as laugh inducing as "Male Fraud," as far as I'm concerned, the more conflict the better.

As a reader and a television viewer, if a story isn't dramatic, no matter what its genre might be, I won't read it or watch it--unless I'm trying to fall asleep. :-)

Here's hoping all the drama you encounter this week comes from fiction. (Real life is much easier without conflict and drama.)

The Importance of Secrets

Every one of us has a secret, something which we haven't told anyone--not our spouse, not a parent, not a best friend.

Secrets buried deep within our souls sometimes have a big affect on how we behave, how we see the world, or whether or not we trust other people.

While these furtive facts about ourselves can wreak havoc in our lives, secrets make good fodder for fictional stories.

Soap operas just wouldn't be as intriguing without a baby who could be the result of a clandestine affair.

The Oedipus Rex would be just another story without the protagonist's mother issues.

A murder mystery is much more compelling when the killer eventually confesses he hated the boss he poisoned because he looked just like the stepfather who used to lock him in the mouse-infested feed bin of a lonely country barn.

When developing characters writers delve into the pasts of these fictional people. They ask all kinds of intimate questions of their characters, so to speak.

When they learn Sarah was bullied as a teenager, or Mike saved the life of a little girl and no one knew what he did, or Cecily gave away a daughter to adoptive parents and then learned she could no longer have children, writers understand something very important about their characters. They understand that past secrets influence present behaviors. Once writers are aware of what makes their characters tick, writing plausible stories about the characters' reactions to certain situations becomes a little less challenging.

Whenever we read a book or watch a movie, the story always becomes more interesting when we take time to discover just why a character acts the way she does. We should always spend time getting to know the secrets of the Sarah, Mike or Cecily in the fictional story we're reading or viewing. I guarantee the character creator did.

Posted by Fran Shaff at 9:59 AM No comments: