I'm interrupting my series on plots this week to take time to thank Readers for the wonderful feedback you've given me for my new "Tender Mysteries Series" in Historical Romance.

Thank you for acquiring the books in this series, and thanks for your kind words of appreciation. I'm so glad you've been enjoying "Resurrected," "Restitution," and "Retribution."

"Recruited," the fourth book in the series will be available this spring in e-book and paperback.

"Ricochet" and "Relentless" will be out towards the end of the year in e-book and paperback.

Remember, the first book in the series, "Resurrected," can be downloaded for FREE just about everywhere. Amazon is still charging 99 cents, but they will price match with other sites if you tell them about the lower price. 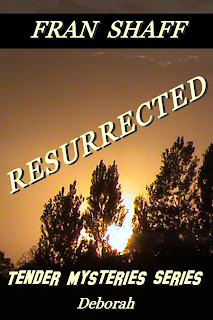 We have less than a month until it's spring in the northern hemisphere, and are we looking forward to it!

I hope all of you, Dear Readers, have a wonderful rest of February, and I'll be back with one or two more plot discussions in March.

Posted by Fran Shaff at 3:28 PM No comments:

In both story lines there is competition between the protagonist and the antagonist. In an underdog plot, the hero is in a diminished circumstance, in some way lower than the antagonist. For example, in the classic movie "Rocky" the hero is clearly on a much lower level in boxing than Apollo Creed the champion fighter who challenges the "local boy" to a legitimate boxing match.

In a straight "rivalry" plot, the foes are on a level plain. They may have different skills which they will employ in the competition, but they are equal as competitors on the whole. The sequels to "Rocky" are rivalry stories rather than underdog story lines because, in the end of the first movie, the hero has raised his status to the same level of other boxing champions.

The competition in a rivalry or an underdog plot may be an actual contest like a boxing match, bowling competition or a bake off, but it can also be a competition for something less tangible.

For example, every version of "Cinderella" is an underdog story, and the competition is always about love and marriage. The movie "The Patriot" starring Mel Gibson is in many ways a rivalry story with the competition being between the British soldier who shot the American farmer's son and the American farmer (Gibson). The two main characters in this movie, though in different circumstances, are on an equal playing field.

In both rivalry and underdog story lines the protagonists and antagonists are fighting for the same thing. (Apollo Creed and Rocky want to win the boxing match. The British soldier and the American farmer want to win control of the United States, either for Britain or for America.)

Both kinds of stories have three essential stages, much like other types of plots.

The second stage of the rivalry and underdog plot is all about the rising and descending power of the two main characters. Though the protagonist usually takes quite a beating during this phase of the story, he does enjoy a few victories.

The third stage brings the showdown between the villain and the hero. This is the grand competition. Everything which has happened up to this point has led to this confrontation. Rocky has spent all of his time training for the fight. The American farmer has sacrificed everything and, at last, faces the man who murdered his son and wants to take away the freedom of his countrymen.

Once the competition is over in a rivalry story, everything in the protagonist's world returns to normal. In the case of the underdog story line, the hero may or may not win the competition, but the reader should be given a satisfying ending. Rocky didn't win, but he wasn't clearly defeated either, and people who saw the movie walked away satisfied with the ending (satisfied enough to inspire LOTS of sequels).

Competition is always seductive to the observer, whether we're attending a sporting event, reading a book, watching a movie or frittering away a little free time watching a reality show on television.

We like competition. That's probably why a well written rivalry story (and underdog story) is always popular with Readers.

Rescue plots involve three main characters: the protagonist, the antagonist and the victim, and three main parts, the first, second and third acts.

In the first act, possibly when life seems happy and serene for the protagonist and the fated victim, the two characters are separated from their peaceful existence by the antagonist and plunged into a nightmare.

The second act is all about the protagonist's attempted rescue of the victim which is thwarted over and over again by the antagonist until the segue into the third act.

In the third act the forces of good and evil are at odds in the showdown between the protagonist and antagonist. In the end, the hero defeats the villain and saves the victim.

As is true with any good love story, in a rescue story the reader knows from the beginning how the book will end. Just as the man will win the woman's affections in the end of a love story, the protagonist will defeat the antagonist in a rescue story and restore the victim to her peaceful situation.

Since Readers are expecting a happily ever after ending, the most important part of a rescue story is the attempt the protagonist makes toward succeeding with his quest. The more unexpected and dangerous the obstacles he must overcome, the better. The more ingenious the protagonist must be to thwart the roadblocks placed in his way by the antagonist, the more entertained the Reader will be.

Four things to remember with a rescue plot in addition to the above are:

1. The antagonist acts as he does to get something from the protagonist he believes rightfully belongs to him.

2. The antagonist uses the victim to get what he wants from the protagonist.

3. There must be a close connection between the protagonist and the victim, not necessarily a personal relationship, though. For example, let's say two men were navy seals, and, while on a mission, they pocketed a dozen diamonds, incidental to their mission, and kept them, turned them in, or did whatever was the right thing to do. One of them, who happened to have a daughter, died. The antagonist, who believed the diamonds belonged to him, might kidnap the daughter, whom the surviving seal had never met, and demand he bring him the diamonds or the victim would be killed. In this instance, there is a close connection between the protagonist and victim, even though the two of them have never met.

4. Morally speaking, there is no question the hero is in the right, and the villain is in the wrong.

A rescue story can provide wonderful entertainment for a Reader if the challenges the hero faces are engaging enough to keep her turning the pages. Thus, it is the struggle taking place in the second and third acts which is the most challenging part of writing a rescue story and the most enjoyable part of reading one.

Next week my series on various plots continues.

Most of us have probably had the urge to seek revenge against someone who's harmed us at least one time in our lives.

That's one reason why we enjoy reading revenge stories and watching revenge movies.

Over the next few weeks I'll be discussing various kinds of plots and the specific structures of each of them. I'm hoping, by mentioning a few devices writers use, Readers will enjoy their books even more by understanding how writers set about creating a story a Reader just can't set aside until she's reached the end.

A revenge plot involves a protagonist who's been wronged. She's tried to get justice through normal channels, but doing things the right way left the antagonist unpunished. The protagonist believes she has no choice but to take matters into her own hands.

A revenge plot is set up in this fashion:

1. The protagonist is living her normal life when along comes the antagonist to harm her in some way.

2. The protagonist takes action through proper channels but gets no satisfaction.

3. She decides she can't live with what the antagonist has done. If the authorities won't punish the offender, then she will seek justice in her own way.

Important Note: Readers should see the protagonist's actions as morally justified, and they ought to be able to empathize with her too. (A friend stealing a woman's husband would be a weak motive for revenge. A friend killing a woman's husband AND setting up the crime to look like the wife did it AND the friend being awarded custody of the couple's children--now we're talking major motive for revenge (with mega complications. How is the protagonist going to get revenge against a woman whom her children have grown to love while the woman served her time in jail for a crime she didn't commit?)

4. The protagonist plots her revenge and goes about carrying out her plans, improvising whenever she fails along the way.

5. The big showdown occurs when the protagonist and antagonist meet face to face. At this point the protagonist may succeed, fail, or decide to let go of the need for revenge because the moral price she must pay is too great (or for some other natural reason which would leave the Reader feeling satisfied).

A revenge plot can be tricky to write because the protagonist usually goes to a much darker place than she is accustomed to. A writer must take care to keep her from losing favor with the Reader or the Reader will be greatly dissatisfied.

The upside of a revenge plot, from a Reader's perspective, can be this: that urge to seek revenge we all have from time to time can be met when we Readers live vicariously through the protagonist who succeeds in getting justice for a wrong every Reader can identify with.

Next week I'll discuss another type of story line. Until then, go out and get some revenge--only in your stories, of course. :-) I hope you read a good one this week!

Posted by Fran Shaff at 3:08 PM No comments: