Dear Readers, I thank you for your wonderful feedback on "Resurrected" and "Restitution," the first two books of the new Historical Romance "Tender Mysteries Series."

However, according to you, "Retribution," the third book of the series, is your favorite. (It's my favorite too! -- at least until the next books come out later this year and next.)

"Retribution" is a powerful story with an amazing, totally gripping confrontation that takes place when a gun-wielding Susan faces the man responsible for kidnapping her younger sister Bonnie. 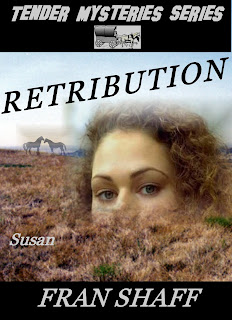 Sheriff Sam Feist realizes Susan is a passionate woman. Her feisty verve is one of the things he finds most attractive about her. However, when she insists on going after a ruthless kidnapper, he’s got no choice but to tell her to stay out of lawmen’s business.

Susan promptly ignores the handsome sheriff’s advice. No one is going to stop her from going after Bonnie. Neither will anyone hinder her from keeping her pledge to seek retribution for her sister’s kidnapping.

As Susan and Sam separately pursue a dastardly abductor, they cross paths. Tensions soar, and hearts break when dangerous liaisons put lives in peril and lead to a violent confrontation which changes Susan’s life forever.

Setup: Susan and Sam have crossed paths on their separate pursuits of the kidnapper.

He’d expected she might pull her hand away, but she didn’t. Instead, she squeezed his hand tightly and let him take her safely away from the campsite and onto the road.

When they’d walked west and covered about fifty yards along the road he asked, “Are you feeling better now, Miss Willet?”

“Maybe…I don’t know…” She let go of his hand, stopped walking and looked up at him.

In the dim moonlight, below the twinkling stars and scattered clouds, she was more beautiful than ever. Her lovely auburn hair, which had been wet from a fresh washing when he’d held her earlier, had dried into a mass of soft curls, framing her face in a most elegant way.

“I don’t expect I’ll begin to feel better until Bonnie is safely home.”

He touched her chin. “I wish I could take away your pain. You don’t deserve to suffer another loss, not after all you’ve been through.”

She turned away from him. “Never mind my pain. It’s Bonnie’s sufferings I’m concerned about,” she said, looking at him again. “We’ve got to bring her back! I’ve got to see to it she’s home with us again.” She spun away and folded her arms. “Oh, why didn’t I go to the school to meet her?”

She suddenly bent over and began to retch.

Sam went straight to her and held her hair away from her face until she finished being sick.

“Please, Miss Susan,” he said, placing an arm around her shoulders when she straightened up, “you’ve got to stop second guessing your actions. You did nothing wrong. The man who took Miss Bonnie is evil, and evil does what it desires. You couldn’t have stopped him.”
She pulled a frilly hanky from the pocket of her pretty dark green dress and wiped her mouth. “I suppose you’re right.” She sighed and returned her hanky to its home.

She took him by surprise when she turned inside the embrace of the arm he had around her shoulders and wrapped her arms around him.

Instinctively, he held her close.

“I’m cold,” she said as she laid her head on his shoulder. “I’m cold and tired, so cold and tired. I haven’t felt this spent since Deborah, Molly and I endured the misery of recovering the lifeless bodies of our family members after the flood.”

Sam tightened his hold on her and closed his eyes as a queasy feeling stirred in his belly. Dear heaven, she’d had to participate in recovering the blanched, hard bodies of her family and friends after the flood had destroyed the wagon train? She was still a child back in eighty-eight!

He stroked her hair as he realized he was holding the strongest woman God had ever created.

“If you’re cold, Miss Willet, we’d better return to camp. It’d be best if you put on your wool coat and snuggled into your pallet for the night.”

The last thing Sam wanted to do was let go of her, but she needed a bed and a night’s sleep more than she needed anything else. If she could get some rest she’d feel much better.

He reluctantly eased her out of his arms and took her hand. Without saying another word he led her toward the campsite.

To his surprise, Miss Elizabeth met them about twenty yards from the fire. She was bubbling with excitement.

“She left us a clue!” she exclaimed. “I searched the history book, and I found a clue from Bonnie. I know exactly where she’s been taken!”

"Retribution" is now available in e-book at: Amazon, B&N, I-Books, Kobo Books, Sony and other places on the Internet. The paperback edition will be available later this spring.

Best wishes for a good week!